Title Prof. Yang In Kim of Dpt. of Physiology Identifies a New Central Mechanism for the Antihypertensive Effect of Estrogen

Prof. Yang In Kim of Dpt. of Physiology

Identifies a New Central Mechanism for the 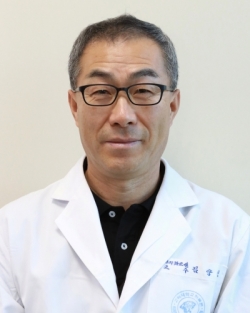 University College of Medicine proposed a new treatment strategy for

hypertension by confirming the antihypertensive effect of estrogen on the central

than men. Abundant evidence indicates this is because of estrogen’s

antihypertensive effect by suppressing the activation of the sympathetic nervous

system and vasodilation. Yet, the exact mechanism is poorly understood.

In addition to the sympathetic nervous system, the neurohumoral system that is

highly likely to be associated with the development of salt-dependent

hypertension is subsumed under the central nervous system. Some of the neurons

that consist the system produce vasopressin which has antidiuretic and

vasoconstrictive effects that play a crucial role in the pathogenesis of

hypertension. The team hypothesized that estrogen inhibits hypertension through

In the ovariectomized female rats salt-hypertension model, when hypertension

was induced, an increase in blood concentration of vasopressin was similar to

with estrogen replacement, even with hypertension inducing procedures,

hypertension wasn’t induced and the blood concentration of vasopressin was

much lower, according to the team’s research.

is inhibitory-to-excitatory-transition of GABAergic transmission in neurons. It

also found that estrogen administration suppresses the emergence of GABAergic

In addition, the team tested that the reason estrogen suppresses the emergence of

GABAergic excitation in vasopressin neurons is that it prevents the accumulation

of chloride ions in vasopressin neurons by increasing the expression of KCC2,

was remarkably alleviated when KCC2 activator was used.

of antihypertensives by investigating a new central mechanism of estrogen’s

antihypertensive effect,” Professor Kim stated. “I hope that the results of our

to many patients suffering from hypertension.”

GABAergic excitation in magnocellular AVP neurons” was published online in