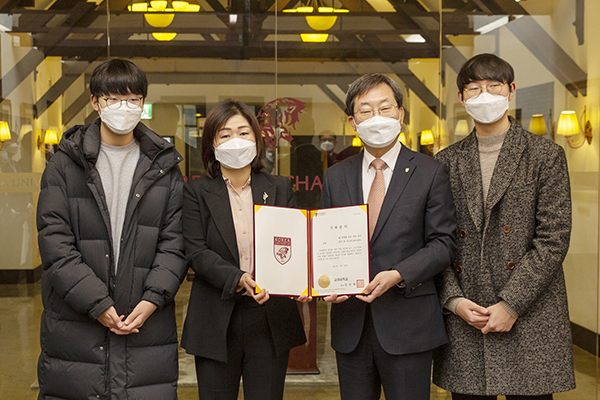 There was a righteous doctor who cared for others even in the most desperate situation where his own life was at stake: the late Dr. Se Won Lim (Incoming class of 1990 of College of Medicine).

He was a warm and caring doctor. Even in his last day of life, he did not deviate from a righteous path. To commemorate a beloved KU member’s noble spirits, his bereaved family and classmates made a donation to his alma mater.

KU Medicine (Executive Vice President for Medical Affairs and President & CEO of University Medical Affairs Young-Hoon Kim) received a total of 200 million won—100 million each from the family and the Graduates Association of Incoming Class of 1990—for medical development fund in memory of Dr. Se Won Lim on 26 January (Tuesday). The donation ceremony took place at the President Chamber on the fourth floor of Korea University.

It was attended by Dr. Lim’s family members including his wife Eunhee Shin (Incoming Class of 1990 of Nursing) and two sons, members of the incoming class of 1990, and key leaders of the university including President of Korea University Jin Taek Chung and Executive Vice President for Medical Affairs Young-Hoon Kim.

The donation ceremony was followed by a naming ceremony of ‘Se Won Lim and Incoming Class of 1990 Education Room’ on the fourth floor of Korea University Medical Library. This was in honor of Dr. Lim and the classmates’ love for their alma mater, and at the same time, to commemorate Dr. Lim’s sublime spirit as a caring healthcare provider for the students and colleagues.

“I am grateful for this opportunity to convey my appreciation to my alma mater. Thank you for your heartfelt sympathy and support,” said alum Eunhee Shin. “I want to be someone who cares and treats people’s minds with empathy like my father,” said the eldest son of Dr. Lim when asked about what he wants to be.

“We raised the funds in memory of our dearest and beloved friend,” said members of the incoming class of 1990 including alum Jongwoo Baek. “I am grateful to have a place where Professor Lim’s passion and dedication can be passed on to fellow doctors and medical students.”

“All the healthcare providers respected alum Lim as he was truly a caring doctor,” said Executive Vice President for Medical Affairs Young-Hoon Kim. “I would like to express my sincere appreciation to him and the 1990 incoming class for their honorable contribution. Also, I will ensure that the precious message can be conveyed to the fellow students and doctors.” 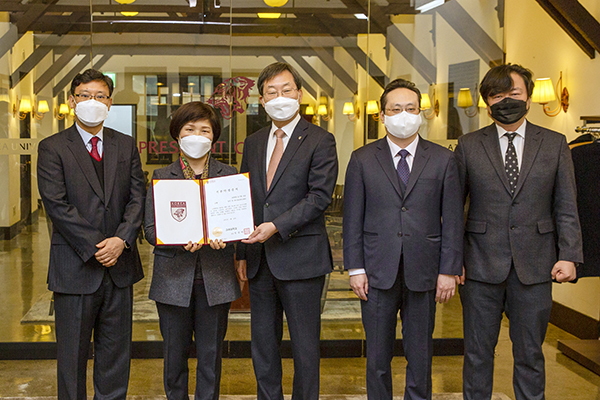